For the children who love to know of children's work in the Field, I want to say that about four years ago my three-year-old son was very ill with the grip, and as I had been studying Christian Science only a few months, I felt that I was rather an incompetent practitioner; but as I had no help in the house, no telephone, and my husband was away, I decided to my best without asking for outside help, since I knew that God does the work.

I spent the greater part of one day reading and demonstrating with only a slight improvement. At five o'clock my mother came in and said it was a shame to do nothing for the child; but I told her he was safe in God's hands. She said, "Well, I will go home and get supper for the folks, then return and stay all night with you." As soon as she had left the house, I took the child in my arms and apprehended as clearly as I Could that God's work was done, and that my dear child was perfect. So long as I held him, and held to this truth he said he was free from pain, but as soon as I put him on the couch he cried for help. I told him I would have to get supper ready, but that I would all the time know the truth for him. My older boy, then four years of age, said, "I'll treat him," and when I left the room to get supper he knelt by his brother's couch and prayed with his understanding of Christian Science all the time I was absent. 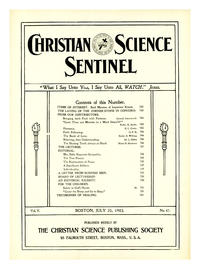