with contributions from Phillips Brooks

The reading rooms of the First Church of Christ, Scientist, on the third floor of Pythian Temple building, are now open in the evening from half past seven to nine o'clock, as well as during the day from 9 a.m. to 4 p.m. All Christian Science literature can be obtained there, and Christian Scientists will always be found in attendance. Gentlemen are attending the rooms in the evening. The public is cordially welcomed to these rooms.

The Christian Scientists had the pleasure of having Judge William G. Ewing of Chicago with them on Wednesday evening at their meeting, and he spoke to them at length, after listening to demonstrations which were given during the meeting, the point of his talk being that there were no small demonstrations in Christian Science, for each one proved a dividing line between man's weakness and God's strength or allness. He illustrated this point by telling a story of a good man who had been brought up in one of the Orthodox beliefs, who was kind, lovable, but solemn in his religion, and who thought there should be more earnestness in the face of his growing boy, rather than the lovable smile that always greeted him. One day while driving with this boy he began a long discourse on his belief in the power of God. when the boy interrupted him with the remark: "Well, father, don't you think you're going a long way around to tell me something which you can get at in a very short way? You know as well as I know that you could not make even a corner of a star, nor could any man, and if you could make a corner of a star you could make the whole star,—you could make the whole universe; and I say that it is the one power which makes not only the little corners of the stars, but the whole universe." 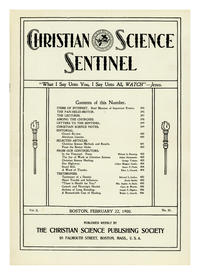