Admiral Dewey has a loving cup, presented by an admiring western city, which is large enough to hold a great deal of love, but a figure of Fame is perched on the rim in such a manner that it rebuffs every one who tries to drink out of the cup. There is a deep moral lesson in this present, which whoso will may study out at leisure, though it does not appear to apply to Dewey.

Send a comment to the editors
NEXT IN THIS ISSUE
Article
However perplexed you may at any hour become about... 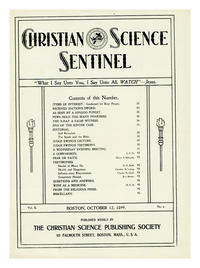