Shortly before I was to enter...

Shortly before I was to enter a sanatorium for a stay of at least two years, I met a Christian Science practitioner and began the study of Science. I was suffering from what was said to be incurable tuberculosis, and the authorities anticipated an operation for me.

I felt entirely alone, having lost my health and the singing career to which I had completely dedicated myself. But the practitioner introduced me to the study of the Lesson-Sermons from the Quarterly, and I also studied the chapter on Prayer in Science and Health by Mrs. Eddy.

Send a comment to the editors
NEXT IN THIS ISSUE
Testimony of Healing
At the age of thirteen I was... 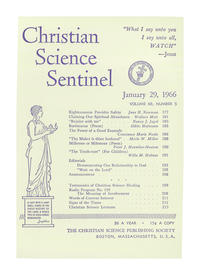