Almost everyone will agree that there are great turmoil and uncertainty in the world around us because of the menace to humanity of the atomic or the hydrogen bomb, the ideological conflict between individuals and nations, and the racial struggle for recognition and equality. It seems that every writer or speaker, with a serious trend of thought, speaks of "the challenge of today," and as he does, he discusses his own pet fear, usually classifying it as some new phase of danger which mankind has perhaps overlooked and which may be subtly sneaking up on him to bind or destroy him.

But is not the menace of today the same threat that presented itself to Isaiah, to Jesus, to Paul, and to Mrs. Eddy;' Is it not the attempt of the so-called mortal mind to oppose the supremacy of the one divine Mind, revealed in Christian Science?

Send a comment to the editors
NEXT IN THIS ISSUE
Article
Why Study the Lesson-Sermon? 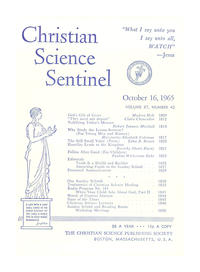