I had been exposed to Christian Science...

I had been exposed to Christian Science for some time, but it was not until I had accompanied a relative to a lecture on the subject that I became somewhat aware of the good this religion is bringing to mankind. I was startled by the lecturer's opening statement, "I expect healings here tonight." My thought went to the lump that had been forming in my breast over a period of time and was becoming increasingly sensitive. I do not recall today who the lecturer was or even the theme of the lecture, but I know that I was healed at it.

It was about two weeks later that I again thought of the lump, which had been almost constantly on my mind prior to hearing the lecture, but I could find nothing. I was completely normal!

Send a comment to the editors
NEXT IN THIS ISSUE
Testimony of Healing
It is my earnest prayer that this... 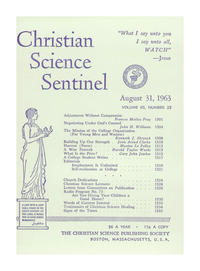