Evidently so called because God later spoke with Moses there (e.g., Ex.19:18-20), giving him the Ten Commandments, found in Exodus 20. It is often referred to as "mount Sinai" (Ex.19: 18), apparently the topmost peak of a mountain range known as Horeb (Ex. 3:1). Mount Sinai is usually identified with the modern Gebel Musa in the Sinai Peninsula.

Send a comment to the editors
NEXT IN THIS ISSUE
Testimony of Healing
I have been a student of Christian Science... 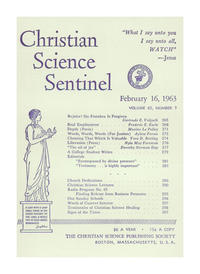