The healings reported to Christian Science Activities for the Armed Services cover a wide range of diseases and of discordant physical, mental, and moral conditions. Many inspiring cases are related by the Christian Science Ministers calling at veterans hospitals in the United States and other countries.

A disease often encountered by these Ministers is alcoholism. One case will suffice to show the power of prayer to regenerate and heal. A former serviceman was sent to a veterans hospital in the Middle Western part of the United States to be cured of alcoholism. Until he was twenty years old he attended a Christian Science Sunday School regularly. After he completed Sunday School, he joined a branch church, served on its ushering staff, and continued to study Christian Science. 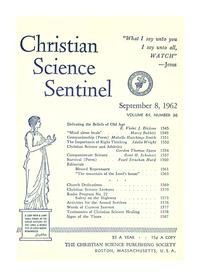