Shortly after being separated from the United States Marine Corps, a man visited our office at The Mother Church to express his gratitude for Christian Science Activities for the Armed Services. He said substantially, "Although my home and my church were sometimes thousands of miles away, I always felt that Christian Science was close at hand and that I could not get away from it as long as I attended the services conducted by Christian Science Ministers and Representatives. While stationed in the United States and in the Orient, I was able to attend services, and at them I found the strength needed to perform my arduous duties."

Wherever Christian Science services are held, they are essentially the same, because they are conducted according to the Manual of The Mother Church by Mary Baker Eddy. As a result, they give Christian Scientists a comforting and encouraging feeling of familiarity. A serviceman summarized this point in these words: "The services are like coming home." 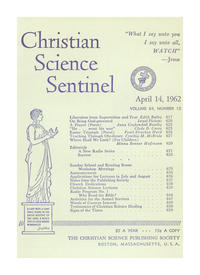