I am deeply grateful for Mary Baker Eddy's...

I am deeply grateful for Mary Baker Eddy's revelation of Christian Science. Since childhood I had groped for an understanding of God but could find no unerring truth to satisfy my longing. I began to read avidly everything I could find on psychology, psychiatry, and other mental subjects, but the more I read, the more confused I became until I wondered if there was a God and began to suffer from a nervous breakdown, depression, chronic fatigue, and insomnia.

At this point a friend asked me to try Christian Science. She gave me Mrs. Eddy's little book entitled "Rudimental Divine Science." She also lent me a copy of Science and Health by Mrs. Eddy and copies of The Christian Science Journal and the Sentinel. I remember the joyous expectation that filled my heart as I scanned the chapter titles of Science and Health and then began to read it.

Send a comment to the editors
NEXT IN THIS ISSUE
Testimony of Healing
Divine Love always has met... 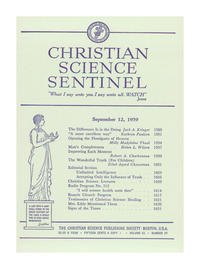