Although my husband and I...

Although my husband and I have had many healings in Christian Science in the relatively short time that we have been studying it, the one which will always stand out to me is that by which we were introduced to this wonderful healing religion.

My husband had a stroke from which the doctors said he could never fully recover. They also said that he would never be able to work again. I was in the depths of despair and did not know which way to turn. I was very much in need of something on which to lean and from which to gain the courage to keep going. The important thing was to encourage my husband to want to live.

Send a comment to the editors
NEXT IN THIS ISSUE
Testimony of Healing
During the years after my first... 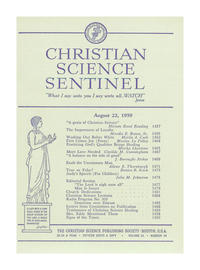