A lovely healing took place at Debbie's party. She and Mother had sent out a number of invitations to her schoolmates to come and spend the afternoon at her home. Several of them were pupils in the Christian Science Sunday School, which Debbie attended.

After the children arrived, they started to play games. One was called "Lemonade" and was new to them. So Debbie's mother explained how it is played. 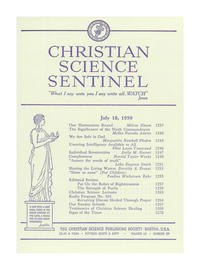