It was immediately following a...

It was immediately following a humble petition to God for deliverance from a very unhappy state, diagnosed as extreme nervous exhaustion, that a copy of Science and Health by Mrs. Eddy was offered to me by a student of Christian Science whose practice of Christianity in daily life I had previously noticed and admired. I began to read the chapter entitled "Footsteps of Truth," and I knew at once that I had found the truth I was seeking.

After a few days on holiday, during which I had to decide whether or not to leave my work for an indefinite period in the hope of allaying a so-called incurable heart condition, I returned to my office, thanks to Christian Science, free of that ailment. Never since have I been absent from work on account of illness. A few weeks after this healing, I realized that I had been reading Science and Health for hours through the night without the glasses which I had used constantly for thirteen years because of astigmatism. I have not needed the aid of glasses during the ten years that have followed.

Send a comment to the editors
NEXT IN THIS ISSUE
Testimony of Healing
How grateful I am for Christian Science... 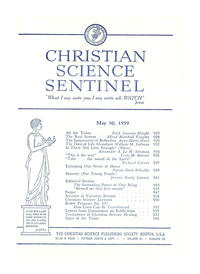