[Following is substantially the text of the program of the above title released for broadcast the week end of February 6-8 in the radio series, "How Christian Science Heals," heard internationally over approximately 800 stations. This is one of the weekly programs produced by the Christian Science Committee on Publication, 107 Falmouth Street, Boston 15, Massachusetts. ]

with contributions from Wayne L. Bart

Speaker: How deeply encouraging it is to realize that God has given man dominion over the physical difficulties that seem to plague mankind ! The experience of our guest, Col. Wayne L. Bart, of Fairfax, Virginia, is a fine illustration of this. A crippling injury he'd sustained to his arm was completely healed through his reliance on God's power alone.

And you received this injury to your arm during the Second World War, isn't that right, Colonel Bart? 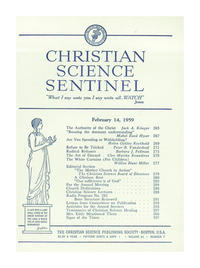