DIVINE MIND, NOT AN IQ, IS THE CRITERION

"When will the ages understand the Ego, and realize only one God, one Mind or intelligence?" This arresting question of our Leader, Mary Baker Eddy, on page 204 of "Science and Health with Key to the Scriptures" should cause Christian Scientists to evaluate their thinking to see whether they are accepting one Mind or intelligence, or whether they are allowing the world's belief in the finiteness of intelligence to limit them in their daily life.

Even children begin to feel the restrictions placed on them by the world's thought of finite intelligence. In some places, the moment a child enters school a test is given in an attempt to measure and thus establish his intelligence quotient, or his IQ, as it is called. Unless the IQ of a child is high enough, he is said to be limited; and unless some future tests show improvement, he is expected to remain limited for the rest of his life. 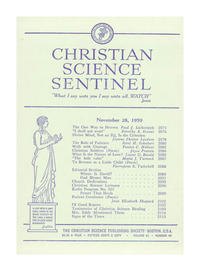