Controversy has long raged over the differing aims of science and Christianity. Undoubtedly, both seek freedom for the human race. But forceful arguments have been used in support of the theory that the two belong in different realms. Even Christianity as Christ Jesus presented it has been misunderstood, and his great proofs of the divine Science he came to reveal have been considered miracles, or the setting aside of natural laws.

Christian Science declares that these so-called miracles were demonstrations of higher laws than those of physics. It offers many healing proofs to confirm the fact that Christianity and Science are one and that true Science is of God, not of matter. Christian Science demonstrates the absolute truths of being and brings God's will to light as the supreme governing force of the universe. 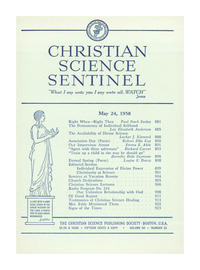