Christian Science is a practical...

Christian Science is a practical religion, the teachings of which set forth God's law, which is referred to in the beautiful words found in Psalms (107:20), "He sent his word, and healed them."

Many instances of the healing power of the Christ, as revealed by our revered Leader, Mary Baker Eddy, in her discovery of Truth, have come into my experience since I became a serious student of this great religion. A healing of the false appetite for alcohol and tobacco was among the first dividends realized from my initial investment of time spent in the study of "Science and Health with Key to the Scriptures" by Mrs. Eddy.

Send a comment to the editors
NEXT IN THIS ISSUE
Testimony of Healing
One evening, about dinnertime,... 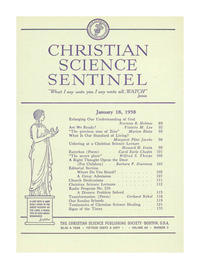