"SEEING ONLY THY CREATION"

In the Bible these words are written (Gen. 1:31): "God saw every thing that he had made, and, behold, it was very good." And John tells us in the first chapter of his Gospel that all things were made by God and that there was not anything made without Him. Notwithstanding these statements from both the Old and the New Testament, many people still believe that evil comes from God.

Mary Baker Eddy, the Discoverer and Founder of Christian Science, has brought to light the falsity of this belief that God sends evil. She calls to our attention that there are two distinct records of creation in Genesis: the true record given in the first chapter and in the first few verses of the second chapter; and then, in the second and later chapters, the false account into which evil enters. 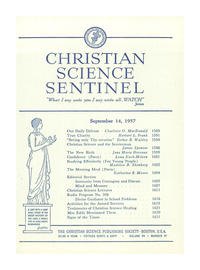