Christian Science came into my life when I suggested to the young woman whom I was planning to marry and who has since become my wife that I investigate her religion in the hope that I could accept it as my own. I had no strong religious connection myself and felt that religious harmony was a good foundation on which to build a successful marriage. The young woman was a Christian Scientist, and I borrowed her copy of the Christian Science textbook, Science and Health by Mrs. Eddy, and began reading it. Also I began attending services in a Church of Christ, Scientist.

After several months of study, I experienced a physical healing so remarkable that my acceptance of this great truth as the pearl of great price was immediate and wholehearted. My hands had been severely burned, and I was in great pain. However, instead of turning to medicine as would previously have been my custom in a situation of this kind, I reached for the Christian Science textbook, feeling that I must find out for myself whether or not there was any truth in the claims of healing of which I had read and heard. After I had been reading for some time, the pain stopped, and I proceeded about the business of the day. My hands were bandaged, but at no time did I resort to any form of medical aid.

Send a comment to the editors
NEXT IN THIS ISSUE
Testimony of Healing
I am very grateful that the Discoverer... 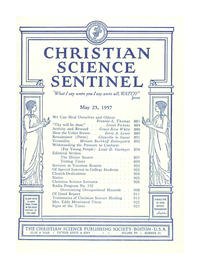