Christian Science was brought into our home when I was a small boy. My mother had just been told by a medical doctor who examined her that she had tuberculosis and that unless she went to another climate, she could not expect to live very long.

My mother heard of a woman in our neighborhood who had been healed of cancer of the stomach through Christian Science. So she went to see this woman and asked her if she could be healed of the tuberculosis. The woman assured Mother that Christian Science would heal her, and she introduced her to a Christian Science practitioner, who lovingly agreed to help her. In just a few months Mother was completely healed. That was over thirty-eight years ago, and there has never been a return of the complaint.

Send a comment to the editors
NEXT IN THIS ISSUE
Testimony of Healing
My acknowledgment of the healing... 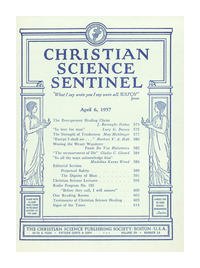