"AS ONE HAVING AUTHORITY"

Nothing is more impressive than a deep sincerity that speaks with authority. No one has ever been more sincere or authoritative than the master Christian, Christ Jesus. He meant what he said, and he spoke with conviction and meaning. It was remarked of him (Matt. 7:29), "He taught them as one having authority, and not as the scribes."

What gave Jesus this remarkable authority? It was certainly not personal magnetism, for he was self-effacing and combined meekness and gentleness with spiritual strength. His power to heal sickness and save the sinner is seen in his inherent naturalness to be and do good. Those who came into his presence felt a divine influence, which had nothing to do with material personality. This influence was the power and purity of the Christ, of which Jesus was so fully cognizant. 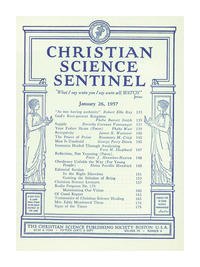