Questioned as to how she would define Christian Science, Mary Baker Eddy answered (Rudimental Divine Science, p. 1), "As the law of God, the law of good, interpreting and demonstrating the divine Principle and rule of universal harmony." Mrs. Eddy had glimpsed this law in an hour of intense physical suffering. When she turned to the Bible for comfort, she received so clear a vision of the power, perfection, and goodness of God and His healing law that it healed her. Later she began to write down what had been revealed. The revelation continued to unfold to her until it became an entire book which she named "Science and Health with Key to the Scriptures." She published this textbook that all the world might share its blessings and learn how to demonstrate God and His law of universal good.

Christian Scientists study this book, for it reveals God and His law of the continuity of good, which Jesus and his followers utilized. Paul wrote of this law (Rom. 8:2), "The law of the Spirit of life in Christ Jesus hath made me free from the law of sin and death." God's law of continuous, uninterrupted harmony and perfection becomes efficacious humanly as we become spiritually conscious of it. To those who perceive it, it is the evidence of eternal, ever-present, unutterable Love, forever the same throughout eternity.

Send a comment to the editors
NEXT IN THIS ISSUE
Article
HOW DO THINGS LOOK TO US? 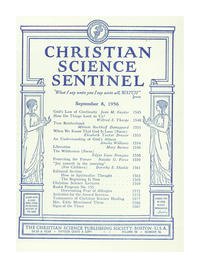