The following report from Australia has been received by Christian Science Activities for the Armed Services and is shared with the Field. 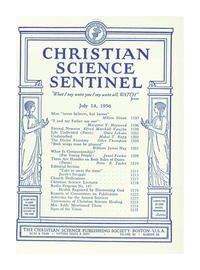