In 1924 I was a young wife and mother whose only thought was to gain the highest social position possible and to have fun, no matter who was affected, including my husband and children. As a result of my activities I became very ill. Extreme nervousness with attendant ills of stomach and heart trouble was manifested. The condition was so extreme that after months of medical attention without any relief I was filled with fear of either death or insanity.

Having a relative in another city who is a student of Christian Science, I wrote to her for help, which was soon forthcoming. She sent copies of the Sentinel and of Christian Science lectures, and she advised me to get a copy of "Science and Health with Key to the Scriptures" by Mary Baker Eddy from the library, since there was no Christian Science Reading Room in the town.

Send a comment to the editors
NEXT IN THIS ISSUE
Testimony of Healing
In coming from the Netherlands... 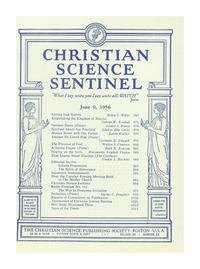