At medical school, Mesmer came across a medieval theory that magnets, passed over the ailing parts of a patient's body, cured him through the magnetic power supposed to flow from the planets and stars into the body. This theory impressed Mesmer and helped to shape his doctor's thesis, "The Influence of the Planets on the Human Body." His financial circumstances enabled him to lead the life of a dilettante.

At the court of the Empress Maria Theresa, Mesmer met a Jesuit astronomer who claimed success in treating nervous patients by applying magnets to the body. Mesmer 's old interest was roused, and he began to take patients. A member of the London Royal Academy came to see his treatment, but declared it to be worthless. The Medical Faculty of Vienna reported that imagination brought about Mesmer's cures. In Paris, where Mesmer next went, his treatments became so popular that in 1784 Louis XVI appointed 4 physicians and 5 scientists, headed by Benjamin Franklin, to investigate Mesmer's claims. After submitting to treatment and observing many experiments, they concluded that, without credulity, magnetism had no effect; that imagination wrought the results; and that there was no magnetic fluid. This report, written by Lavoisier, condemning the power of hypnotism and suggestion, stopped Mesmer's activity.

Send a comment to the editors
NEXT IN THIS ISSUE
Mrs. Eddy Mentioned Them
William Benjamin Carpenter, 1813-1885 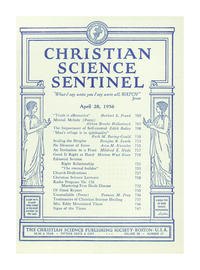