Mary Baker Eddy says in "Science and Health with Key to the Scriptures" (p. 135): "There is to-day danger of repeating the offense of the Jews by limiting the Holy One of Israel and asking: 'Can God furnish a table in the wilderness?' What cannot God do?" To those facing what seem to be insurmountable obstacles in the way of right accomplishment, the lesson here is invaluable. The realization of the omnipotence of God reveals the limitless capabilities of His image, man, capabilities needing but to be claimed and demonstrated. It is only as one accepts the mistaken concept of God as limited, which would imply a limited man, that limitations appear in human experience.

When reading some months ago about the setting of a record of three minutes and fifty-eight seconds for the running of the mile, one student was reminded that in 1864 the best time for this distance was four minutes and fifty-six seconds, nearly five minutes. This time was reduced to four minutes and one and four tenths seconds in 1945. Until recently any better record was considered unlikely, if not impossible. Others refused to accept this limit and continued to strive for something better. 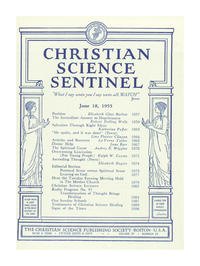