Fruitage from One Class

A Sunday School teacher, whose class is made up of boys and girls of high school and junior high school age, takes special interest in helping his pupils to apply the Sunday School lessons in their daily activities. The following is his account of some of the experiences of the pupils, all of whom are putting the lessons into practice.

"Joan failed in Spanish II and was prepared to spend her entire summer vacation making up the work. Joan had not been diligent in applying Christian Science in her schoolwork, but as we talked about her relationship to God, she became awakened to the necessity for alertness and obedience. In three weeks the teacher told her she could take the test. During the test she remembered her Sunday School teaching—that God is Mind, her Mind, and the only Mind there is—and she was confident that divine Mind would reveal to her the correct answers. To the amazement of her teachers her grade was 85. This was especially remarkable in that she had inadvertently been given a test in Spanish IV, which she had never studied, instead of Spanish II, in which she had formerly failed.

Send a comment to the editors
NEXT IN THIS ISSUE
Testimony of Healing
Through Christian Science I... 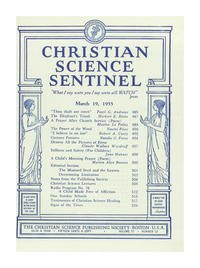