"The very circumstance, which...

"The very circumstance, which your suffering sense deems wrathful and afflictive, Love can make an angel entertained unawares" (Science and Health by Mrs. Eddy, p. 574). This fact was proved to me when I turned to Christian Science for the healing of pneumonia after the doctors said that they could do nothing for me. Before two weeks had passed I knew that I was healed. This healing, which took place thirty-five years ago and has been permanent, is recorded in the Sentinel of January 18, 1941. Since then I have had many other healings through the application of Christian Science. There has not been the slightest desire to turn to any other method.

In an accident, I broke three ribs. It was with great difficulty that I could breathe or speak. My husband was a Reader in a Church of Christ, Scientist, and there was no time to get a substitute to fill his place. When he had gone, leaving me with the maid, I began to work for the service. As I declared that nothing could interfere with the message being read, there were three distinct clicks in my side. The next morning I was free and in my office as usual.

Send a comment to the editors
NEXT IN THIS ISSUE
Testimony of Healing
The testimonies appearing in our... 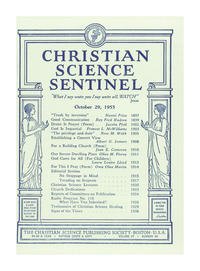