[Following is the text of the program of the above title released for broadcast the week end of April 16-18 in the radio series, "How Christian Science Heals," heard internationally over about 600 stations. This is one of the weekly programs produced by the Christian Science Committee on Publication, 107 Falmouth Street, Boston 15, Massachusetts.]

RADIO PROGRAM No. 31A - What Makes Prayer Effective?

On this program Mrs. Clara S. Harsh of Rochester, New York, told of her own experience, as follows:

Well, it appeared to be hopeless. I was on what was believed to be my deathbed. My physicians and surgeons had said that a complication of diseases, including severe ulcers, was so acute that nothing but an operation would help me; but they also said that I was too ill to live through such an operation and that I could not live without it. 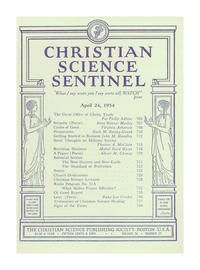