In the face of extremely adverse circumstances Joseph proved the adequacy of man's spiritual supply, together with its demonstrable nature in human conditions. In prison, where he had been placed unjustly, he won the regard of his fellow prisoners, of the prison guard, and finally, because of his spiritual understanding, that of the king himself. Joseph's realization of spiritual good as substance uncovered the impending evil of lack that was to threaten Egypt. He foresaw seven years of plenty to be followed by seven years of famine —what today would be called a business cycle—and advised the king to store enough food during the plentiful years to take care of this catastrophe. In return Joseph was rewarded by the king with his freedom and was made economic administrator of Egypt. His authority was second only to the king, who said to him (Gen. 41:40), "Thou shalt be over my house, and according unto thy word shall all my people be ruled: only in the throne will I be greater than thou."

In her writings Mary Baker Eddy makes many statements which serve to enlighten the understanding to better realize God as the supplier of all good. Among them is the following, to be found in "The First Church of Christ, Scientist, and Miscellany" (p. 5): "Wholly apart from this mortal dream, this illusion and delusion of sense, Christian Science comes to reveal man as God's image, His idea, coexistent with Him—God giving all and man having all that God gives." Man's ownership of infinite good on this basis is clear, unquestioned, and as eternal as God, divine Principle. 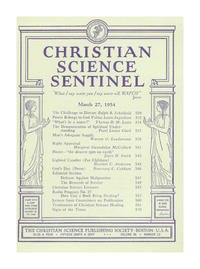