I wish to express my sincere gratitude...

I wish to express my sincere gratitude for Christian Science and for the healings I have had over a period of twenty-five years. I am grateful for membership in The Mother Church and in a branch church. Class instruction has resulted in many blessings.

One of the healings for which I am most grateful happened in 1951. As a result of an auto accident I was taken unconscious to a hospital, where it was found that I had suffered a very serious lung injury, three broken ribs, and a broken leg. When I regained consciousness I placed radical reliance on God's care and in a short time was taken out of the hospital. The broken leg and broken ribs were set entirely through Christian Science treatment, which also healed the lung injury. I was out of work just thirteen weeks. Not only was I completely healed of the effects of the accident, but at the same time I was healed of the need of wearing glasses. 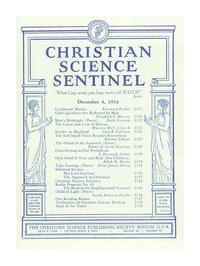