When I learned of what Christian Science...

When I learned of what Christian Science teaches regarding God, man, and creation, I became deeply interested and began to study its teachings. There is not space to tell of all my blessings. I have found freedom from pain, regained lost money, and received abundant supply. I should like to share a healing that was outstanding to me.

I was stricken suddenly with symptoms of a prevalent sickness. As they were very violent, I called a Christian Science practitioner for help. After several days of treatment with only slight relief, it became clear to me that I had not protected my thought during the passing of a friend's mother and that I was allowing myself to believe that I too might pass on.

Send a comment to the editors
NEXT IN THIS ISSUE
Testimony of Healing
I became interested in Christian Science... 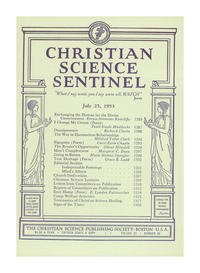