In order that radiocast lectures may be announced in the Sentinel in time for pickup in countries outside the United States, will churches expecting to give such lectures send this information to the Journal, Sentinel, and Herald Editorial Department at least three months in advance of date of lecture, and four months if possible.

The following periodicals were founded by Mary Baker Eddy, the Discoverer and Founder of Christian Science, and are published by The Christian Science Publishing Society, One, Norway Street, Boston 15, Massachusetts, U.S.A.: 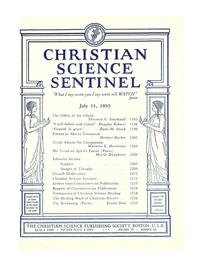