ROLLING BACK THE STONE

The great stone to be rolled back by each of us before he attains full resurrection, or spiritualization of thought, is the laying off of the false sense of selfhood. This is the stone that claims to bar the way out of the sepulcher of materiality and keep us entombed in the seeming limitations of a material body. But this obstruction, despite its apparent substantiality, is entirely a mental creation of beliefs. According to the teaching of Christian Science, it has only the substance that mortal belief assigns to itself, calling itself matter. Spirit and its manifestations comprise the only reality.

When the angel rolled back the stone from the tomb of Jesus, it was rolled back for eternity. The immortal, ceaseless reality of man's spiritual life was proved as Jesus stepped forth. He showed that matter has no life to surrender or to regain; that there exists only the continuity of eternal life, which is in God. The Master's joyous understanding of this truth was demonstrated for the liberation of all men. He revealed this primal truth not only in evidence of his own immortality, but for an everlasting testimony to man's immortal spiritual identity. 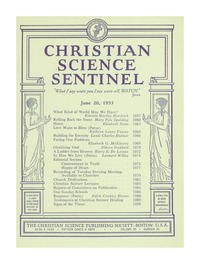