"THE STARS IN THEIR COURSES"

The celestial bodies have seemed to hold a fascination for mankind from ancient times, perhaps because of their remoteness, their mystery, and their symbolism of steadfastness and pattern. Deborah, rejoicing in the Lord's avenging of Israel, sang (Judg. 5:20), "The stars in their courses fought against Sisera." Today countless thousands still believe that the stars in their courses and the planets accompanying them have power to produce benevolent or malignant influences on the lives of individuals and upon the unfoldment of human events. Superstition may seem to act as law until it is uncovered and destroyed by the truth. For that reason it needs definite denial.

Christian Science disclaims superstition at every point. It disproves all fatalism and shows mankind how to work out the problem of being through the demonstration of divine law. This process of proving that God is the sole governor of man requires spiritual effort, and it may not appeal to the spiritually indolent, who find it easier to succumb to a fixed fate than to demonstrate a fixed Principle. But all must come to prove man's perfection as God's image and God's government of His universe, because these spiritual facts of being are inescapable. The understanding that God is one Mind and that the spiritual universe, including the celestial bodies, is actually Mind's idea destroys any supposed power that hoary superstition may claim to generate. Mary Baker Eddy plainly states (Science and Health with Key to the Scriptures, p. 102), "The planets have no more power over man than over his Maker, since God governs the universe; but man, reflecting God's power, has dominion over all the earth and its hosts." 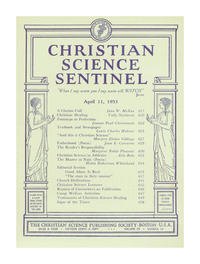