"THINGS WHEREWITH ONE MAY EDIFY ANOTHER"

The world today seems to be in the throes of a great discontent. Humanity calls for a release from the binding or lashing whipcords of war, privation, disease, and destruction. Among many peoples the comforting assurances of Scriptural truth go unheeded. Often forgotten are the grateful words of the Psalmist (Ps. 30:11), "Thou hast turned for me my mourning into dancing: thou hast put off my sackcloth, and girded me with gladness."

Prophetic of our times are the words of Mary Baker Eddy in "Science and Health with Key to the Scriptures," where we read (p. 96): "This material world is even now becoming the arena for conflicting forces. On one side there will be discord and dismay; on the other side there will be Science and peace. The breaking up of material beliefs may seem to be famine and pestilence, want and woe, sin, sickness, and death, which assume new phases until their nothingness appears. These disturbances will continue until the end of error, when all discord will be swallowed up in spiritual Truth." 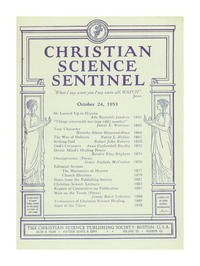