Then school closed for vacation. But when David reached home that afternoon he seemed to feel quite uncomfortable with a cold. Although it was nothing but a lie pretending to be true, when it had knocked at the door of David's thinking and had asked to be allowed to come in David had forgotten to question it. Had he done so he would have remembered that it was only error trying to rob him of health and happiness. Now he had to cast out the false claim which said, "You must stay home and go to bed." 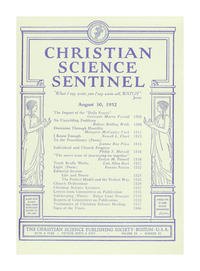