"Let us follow the example of Jesus, the master Metaphysician," writes Mary Baker Eddy in "Retrospection and Introspection" (p. 55), "and gain sufficient knowledge of error to destroy it with Truth." The Master did not leave his followers in a state of ignorance regarding the error he came to destroy, but exposed its nature as a liar and the maker of lies, that is, a deceptive sense and its delusions. But he always proved by example the nothingness of the evil he exposed. His theology—the truth of God's allness and great love and of man's immortal perfection as His son—caused the myth of an evil mind to disappear from his experience. If he had not embodied the forces of Love he would have had no power over the aggressive forces of evil.

Mrs. Eddy followed the example of Jesus and fully exposed the character and methods of the mythical mind she called mortal, the mind which claims that sin is real and that man is a mixture of good and evil, of life and death. Our Leader adopted the term animal magnetism as the specific name for mortal mind, the name which exactly describes its nature and action. She says in "Science and Health with Key to the Scriptures" (p. 103), "As named in Christian Science, animal magnetism or hypnotism is the specific term for error, or mortal mind." This accords with John's revealed description of the devil as "Satan, which deceiveth the whole world" (Rev. 12:9), for hypnotism never creates; it only deceives. 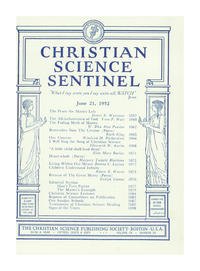