GOOD CAUSE FOR CHEERFULNESS

"Jesus of Nazareth was the most scientific man that ever trod the globe. He plunged beneath the material surface of things, and found the spiritual cause." Thus does Mary Baker Eddy describe the Master in the Christian Science textbook, "Science and Health with Key to the Scriptures" (p. 313). The spiritual cause is the cause of good only, not the cause of evil. Jesus understood the allness of God, good, and it was upon this basis that he did his work.

Contrary to popular belief. Jesus manifested great joy. Several times it is recorded that he told people to "be of good cheer," or, in our modern speech, to take courage. Jesus must have found the spiritual cause for cheerfulness, since it was no mere shallow optimism which he preached and practiced. His pronouncements were based in the solid depths of reality. He taught and proved by demonstration that man is the beloved offspring of the heavenly Father, infinite good, whose beneficence was showered upon all alike, even as the sunshine and the rain bless all impartially. He went about doing good and preaching the good news of the allness of God and the at-one-ment of God and man. His healing work, which was the outcome of his spiritual understanding of the true state of affairs, or the kingdom of heaven, was characterized by its peace-giving, enlivening, and encouraging effects. 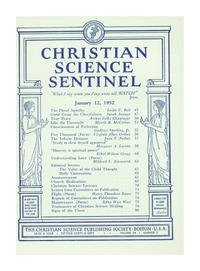