In July of 1947, while attending a Wednesday evening testimony meeting in a Church of Christ, Scientist, in a western city, I was healed of the cigarette habit after thirty years of heavy smoking. At that time I had been attending different Christian Science branch churches for less than a year. The reading from the desk that night touched on the use of tobacco, and the first testimony was by a man who had been freed from this habit. I felt that the import of the meeting was pointed in my direction, and that perhaps the time had arrived for me to part company with tobacco. I was not fully conscious of the fact at the time, but my smoking days ended at that meeting. For several days afterward I carried cigarettes about with me, but from that day on I have had no inclination to smoke.

The gentleness and peace which accompany unfoldment in Christian Science amaze me. While I was in Texas in the latter part of 1948, the tea and coffee habit left me as easily and surely as had the tobacco habit.

Send a comment to the editors
NEXT IN THIS ISSUE
Testimony of Healing
That this testimony may hearten... 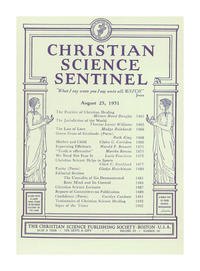