One of the many attention-compelling passages written by Mary Baker Eddy is found on page 392 of "Science and Health with Key to the Scriptures." It reads: "Stand porter at the door of thought. Admitting only such conclusions as you wish realized in bodily results, you will control your self harmoniously. When the condition is present which you say induces disease, whether it be air, exercise, heredity, contagion, or accident, then perform your office as porter and shut out these unhealthy thoughts and fears."

Obedience to the admonitions to "stand porter," "perform your office as porter," has resulted in healing and redemption for many. In every issue of The Christian Science Journal and of the Sentinel appear authenticated accounts of healing, and over the years these healings have embraced almost the entire gamut of mortal sins and distresses. In these testimonies there is abundant evidence that the individuals had originally failed to stand porter at the door of thought, and that healing had resulted eventually from their having performed their office as porter. 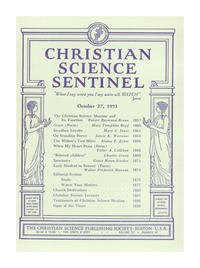