In the Bible we read (Matt. 5:6), "Blessed are they which do hunger and thirst after righteousness: for they shall be filled." Some years ago a friend handed me a package containing the Bible and the Christian Science textbook, Science and Health by Mrs. Eddy, asking me to keep them for her. I had not previously heard of Christian Science, and as I was then not interested, they were carefully put away and for a time forgotten. Later I became ill and was taken to a hospital where three physicians diagnosed my case as cancer. I refused to be operated on and returned to my home with the doctors' verdict that I had but a short time to live.

It was then that I turned to God, and I remembered the books that I was keeping for my friend. I got them out and opened to pages 290 and 291 of the textbook. The truths I read there so inspired me that I was instantaneously healed, and through the years I have been freed from many other diseases.

Send a comment to the editors
NEXT IN THIS ISSUE
Testimony of Healing
In 1930 I was healed of a broken... 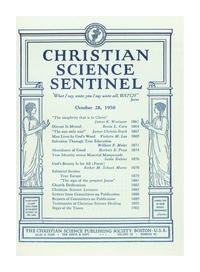