It is now over seventeen years...

It is now over seventeen years since I became interested in Christian Science. During this time I have had many proofs of God's unfailing care. I had always been a searcher for truth, and for years prior to my acquaintance with Christian Science, while I was very unhappy because of ill-health, I looked into many religions and so-called philosophies, but found them all wanting.

I had been suffering from hip trouble since I was a child. I used to have periodic attacks of paralysis so that I was unable to walk for periods of from about three weeks to three months and would be confined to bed. Between times I would suffer so much from rheumatic pain that I was unable to sleep nights. I had been to many doctors, who were unable to give me even temporary relief; and when I asked them if there was no help for me, they would invariably tell me that I would have to go through life that way. Since I was only in my twenties at the time, this outlook seemed pretty grim.

Send a comment to the editors
NEXT IN THIS ISSUE
Testimony of Healing
I feel the time is long overdue for... 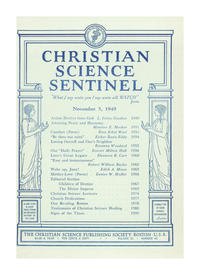