A woman who was becoming interested in Christian Science informed a friend, a student of Science, that she was a devoted supporter of a certain political party. Her father and grandfather had both been members of this party, and ever since women had been given the vote franchise she had consistently "voted straight." With much vigor she asserted that she believed in her party and the principles for which it stood. If someone said anything against her party or its candidates, she arose in immediate defense. If anything favorable was said in regard to the opposition party, she was vociferous in denunciation.

Her friend assured her that she could and should vote the way her conscience guided, and that the Christian Science church does not dictate to its members how they should vote. When asked, "What are your politics?" Mary Baker Eddy answered (The First Church of Christ, Scientist, and Miscellany, p. 276), "I have none, in reality, other than to help support a righteous government; to love God supremely, and my neighbor as myself." 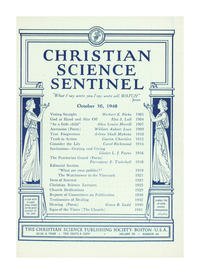