In human experience considerable thought is given to the question of what is called the individual's position in life. Often we find envy and rivalry over eminent positions and a coelbowing in endeavoring to attain them. Individuals are frequently judged by the positions they hold, and given acclaim or sympathy according to whether these are considered desirable or undesirable. This human measuring is apt to become a source of discontent and disappointment. Therefore the whole question of position deserves to be considered impartially, so that the burden often attached to it may be lifted as it is seen in its true light.

In Science man always has his position in Mind. It is not something he is seeking after or attempting to hold. God maintains him in it. It is eternally evident to man that God, infinite good, is All-in-all; that Truth is true; that being is scientific and eternal. Man looks out from this position, not up to it as something to be gained. He is always secure in this position and completely satisfied with it. Because it is individual, no one can take it from him or occupy it. This position is not a dream state, longingly hoped for. It is concrete and forever expressed, a divine state of consciousness, and man cannot be deprived of it. 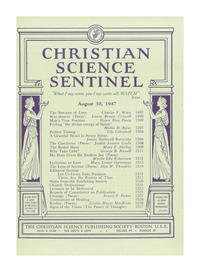