From the beginning of recorded history there has been a conflict between the traditions of the past and the new ideas which are continually unfolding through heavenly inspiration. All the great spiritual leaders of the Bible were men and women who were animated by the progressive impulse of the divine Mind. This true impetus compelled them to break with the traditions of the past and to point out improved standards of morality.

One of the outstanding examples in the Old Testament is Joseph, the eleventh son of Jacob. From his early boyhood he seemed to be guided by inspiration. His brothers were shepherds, who followed the customary life of their time in merely preserving mundane existence, but Joseph was brought by his deep spiritual intuition and fidelity to good through trying experiences to be the second in authority in the land of Egypt. It will be remembered that Joseph had incurred the jealousy of his brethren by reason of his dreams, in which he saw them bowing down in obeisance before him. These dreams were fulfilled when his brothers were forced by famine to seek food at the hands of Joseph, whom they did not recognize, food which was available only because of his inspired interpretation of the dream of Pharaoh and his obedience to wisdom's guidance in meeting the human need. 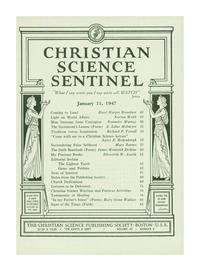