Before the discovery of Christian Science, God's dealings with mankind, except for supposedly miraculous interpositions, were quite generally thought to be handled at long distance. Looking upon their surroundings, the majority of human beings accepted as God's creation what they saw and correlatively accepted the concept of God as restricted by human attributes.

Unanswered prayers to such a God were laid to various causes, such as lack of virtue in the suppliant or an unwilling ear on the part of Deity. People believed that God was able to help them, but they explained His seeming lack of response by saying that what He was besought to do He considered unworthy to do, or for some unknown reason did not wish to do. Human beings in general declared that they knew God to be infinite, but their actions discredited their statements. God might be near at hand temporarily to comfort the sorrowing, they thought, but His answer to prayer was decidedly uncertain. 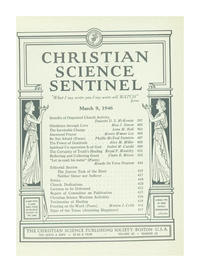