At one time I was a regular...

At one time I was a regular attendant of an orthodox church, for many years attending three services each Sunday. Church music was the only attraction for me; I had no knowledge of the Bible, and I could not understand the mentality of anybody who attended a religious service on a weekday.

Then I met a friend who invited me to a Christian Science service on Sunday. Although I had been a choirman for twenty-six years, I was unable to join in the singing in the Science church for quite a long time, as the words of the hymns impressed me so much and were so different from what I had been used to. I realized then that here was a religion which appealed to me and which I could understand. 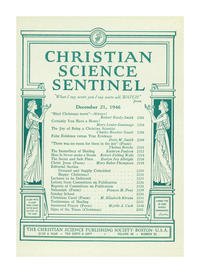