GEOFFREY A. B. COOPER

By hard struggle along the uncertain paths of "trial and error," progress and opposition, the human race has won for itself some semblance of self-government. Too often the selfishness of a few has been responsible for the suffering of the many. Per contra, it has been the few also who have been alive to their responsibilities, answered the call to high purpose, and, with some sense of the fellowship of men, stood courageously for what they have known to be right. Such have promoted spiritual progress from which mankind in due time has benefited.

Abraham had come out from idolatrous Ur of the Chaldees, that he might follow his new-found trust in one almighty God. The children of Israel under the guidance of Moses were liberated from slavery and necromancy in Egypt. Although they reached the promised land, they found that it was possible to remain there only as they lived up to the standards set by the law and the prophets. Then the advent of Christ Jesus and Christianity spread its influence over Europe during the Dark Ages, to be rekindled in the Middle Ages by the few who stood out above their fellows as torches in the gloom, such as Wycliffe, Luther, and Calvin. Later the Puritans and later still the Pilgrim Fathers spread their salutory, inspiring influence far and wide. 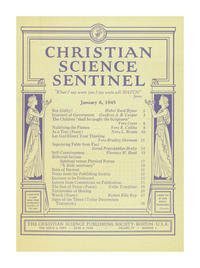