A Ship set sail from a great harbor. Aboard were men of vision, explorers. They were going to plant the flag of their country at the South Pole. After a journey of several thousand miles they anchored off the shore of what has since been called Little America. Here they built shelters, laid in ample provisions of food, clothing, and other necessities. But Little America was not their goal; it was the supply base from which flights could be made to reach their goal. When storms arose they returned to the safety of this base. Warmed, nourished, reassured, they set out again. Finally the day came when the goal was reached.

So, too, in the realm of spiritual discovery the explorer must have a "supply base." The goal of many who turn to Christian Science is the healing of mental, moral, and physical ills. Those who come to Christian Science for the solution of their problems and bring with them sound morals, an unbiased Christian thought, a willingness to leave old landmarks, and a confident trust in good come with an already partially established base of supplies to aid them in reaching their goal. Others, who bring only a scant store of faith, a not too certain sense of right and wrong, a doubt of Christianity, and a determined desire to cling to old, familiar habits, must learn that they will have to establish a base of spiritualized thought in order to continue their voyage and attain their goal.

Send a comment to the editors
NEXT IN THIS ISSUE
Article
"Onward, Christian soldiers" 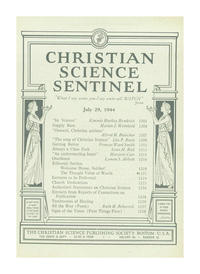